The Benefit of Human Resources in Spanish: Language is about Communicating with Real People

You may see a blog post with “human resources” in the title and think, “What does this have to do with acquiring Spanish?” Well, I’m not talking about your friendly company HR person; I’m talking about the value of living, flesh and blood humans in the process of learning a new language. When you have human resources in Spanish acquisition, language comes to life and functions the way it is meant to: as a means of communication among people. You can get a tutor, you can meet people via online groups, or you may already know someone who speaks Spanish, and you just need to work up the courage to strike up una conversación with them. Even if you don’t have access to Spanish speakers in person, you can get the value of natural speech through the internet, apps, or software like Pars Omni Spanish Voices. 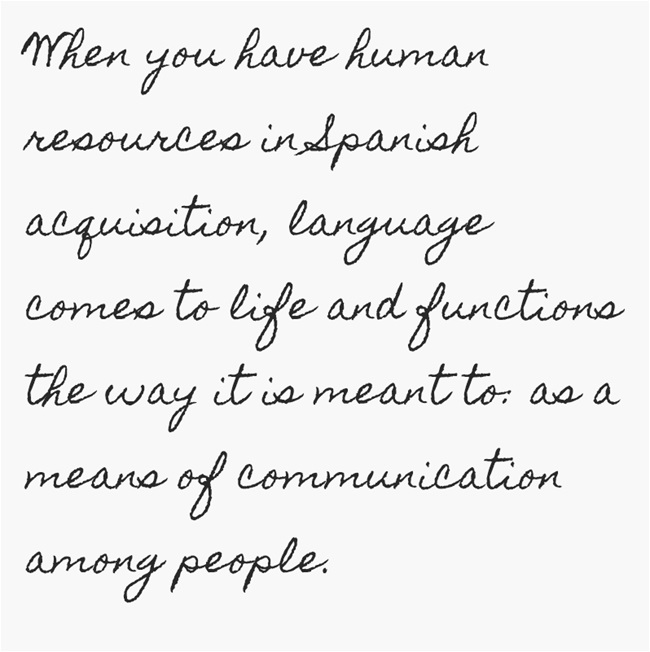 My husband can often understand spoken Spanish but rarely produces the language himself. His understanding is basic and for a long time he was content with that. Recently, however, he has spent more time around Spanish speakers because of the rotation he is on and this has piqued his interest in the language. While before he always had excuses for not learning, like not having enough time or it being too boring, the human element trumps these things. He voluntarily spent time Friday night using a language learning app to learn and practice Spanish while I was making dinner, and even said “That was fun!” when he finished. That’s the power of experiencing language via interaction with people instead of just reading and memorizing a textbook; it becomes a living, vibrant experience that has meaning and joy instead of a dull, stale task.

In his book Re Joyce, Anthony Burgess writes about James Joyce’s life and works, including the multilingual influences in his writing. He says, “Joyce’s urge to learn foreign languages began with a desire to communicate with the great Europe ‘out there’: he had no interest in learning Erse, a very insular tongue.” I’ve never heard of Erse (Google tells me it’s Old Irish/Scottish/Gaelic), perhaps because it is only spoken by a certain group of people in a certain place that I have never crossed paths with. Like Joyce, I have been motivated to learn a foreign language because of a desire to communicate with other human beings. I’ve seen the same thing in my husband and truly believe this is an important part of language learning.

I’m not saying there is no inherent value in language; I am a linguaphile through and through. I love Spanish for the way it sounds when spoken and the way it looks on the page, but ultimately I love it because it allows me to connect with others. Connecting language with people helps to integrate it into your psyche. Without the human connection, language is just a collection of abstract sounds.

As I mentioned above, Pars Omni Spanish Voices is an excellent tool that you should take advantage of because it combines the ability to study at home at your own pace with interaction with native spoken Spanish, an essential aspect of acquiring the language. Download it for free today and get access to stories told by native Spanish speakers that are enhanced with effective learning tools at your fingertips.