As I’ve mentioned before, I recently started taking a dance class after several years of not dancing. I was intimidated by the other people in the class because they clearly dance a lot and are at a very high level. At first it was hard to focus on enjoying the experience because I was worried what the other people would think of my rusty technique. However, once I realized that not only did no one else care what I was doing, but I also wasn’t there for their approval, I was able to let all that go. This was very freeing, and helped me get much more out of the class.

While being around other people who are working on what I am working on can be intimidating, it also drives me to try harder and perform at a higher level than I would by myself. Their excellence motivates me to rise to their level, to do my best – whatever that is at that time – and to keep improving more and more each time. This concept doesn’t only apply to dance. I’ve also found that I enjoy practicing yoga with others more than on my own (with the occasional home practice mixed in). I also enjoy practicing and using my Spanish language abilities with other people more than working on my own. 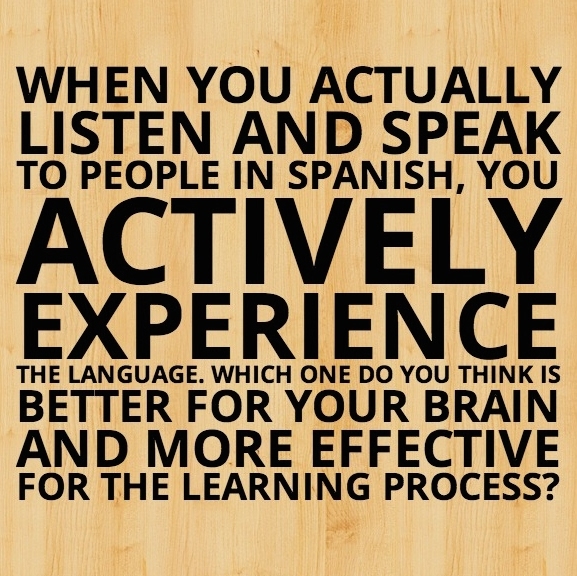 Working on Spanish acquisition with people takes things to a whole new level. It’s like the difference between watching one of my favorite shows, “So You Think You Can Dance,” versus going to a dance class where I move my body and do the movement myself. I enjoy watching the dancers on TV perform beautiful and challenging routines, but I’m just a spectator. When I go to class and dance, I’m an active participant and experience dance for myself. When you read a textbook about Spanish, it’s like you’re just observing, a spectator on the sidelines. When you listen and speak to people in Spanish, you actively experience the language. Which one do you think is better for your brain and more effective for the learning process?

People can be both the motivation and the means in learning Spanish. Maybe you have friends or coworkers who speak Spanish, and you want to connect with and joke around with them more. Having actual people as part of your language acquisition process will immensely benefit you, and your presence helps and motivates others as well. Speaking with other people in Spanish may seem intimidating, or you may think you’re at too low of a level to communicate with others, but it’s never too early to start speaking and hearing the language you want to learn. You’ll make mistakes, but the benefits greatly outweigh any costs, and if you can learn from your mistakes they can be hugely valuable. Making mistakes just means you’re actually trying, and that’s a great thing.

Pars Omni is a great way to combine self-study with human interaction. You can download their Spanish Voices software for free, and you can also check out their live classes where you get to learn alongside others.