I’ve mentioned that my husband is a medical student and that he is, unfortunately, not very proficient in Spanish. I’ve also mentioned that the rotation he is currently in involves seeing a lot of Spanish speaking patients. Because of this, he was given some handy materials on commonly used phrases, and we have been practicing some Spanish at home to help him at work. 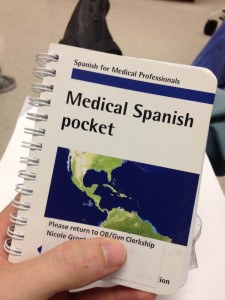 Though he was given some handouts, he has been feeling frustrated with being put in situations where he can’t communicate with his patient because he doesn’t have the Spanish fluency he needs. It makes him uncomfortable to not be able to communicate with and care for them. His discomfort adds to the discomfort the patient is already experiencing because they are in a situation where they need to see a doctor, and because they are with a doctor who doesn’t speak their language. It’s neither party’s fault; it’s just a reality that they do not share a common language, and this interferes with the situation.

While the doctors who assign these patients to him for interviews are trying to give him a chance to get experience and practice, it’s not effective if he can’t even complete the task. His understanding in Spanish is decent and he can say a few basic words, but when it comes to understanding a patient’s detailed explanation of what’s going on with them he tends to get lost. He definitely struggles with responding to them and explaining their medical care; these tasks are simply beyond his ability. He can receive and put out small, isolated chunks of language, but he can’t really communicate.

In the learning process, it’s important to attempt things that are a bit challenging in order to grow. Part of that process is making mistakes and learning from them, but failing completely is ineffective — the learner gains no useful information and gets discouraged. When a task is much too difficult, the learner will just feel overwhelmed and frustrated and not be able to gain anything from the exercise. Both level appropriate exercises and adequate support are essential for meaningful learning and progress to take place. You don’t construct an entire building using one big piece; you lay a foundation, build a frame on that, fill in some more, and eventually the whole thing comes together. Language acquisition is the same way — you must go step by step, brick by brick. Remember this when you’re plugging along through the little bits of language: they will eventually add up to a whole lot, something greater than the sum of their parts — communication.

While Seth has had negative feelings about being tossed into the deep end with Spanish speaking patients, I have seen some positive effects from him being in an immersive environment. His interest in Spanish has been re-sparked: he will spontaneously throw in a word or phrase in Spanish in everyday conversation. He even asks me now and then how to say something in Spanish, just for fun. As a lover of español, I love when this happens and inevitably envision us raising wonderfully bilingual kids. That’s probably a stretch, but I am excited that he is speaking some Spanish and can understand when I say things to him in Spanish. There’s nothing like connecting with real live people to get you interested (or re-interested!) in a language.

For access to authentic Spanish spoken by real live people, download Pars Omni Spanish Voices for free today and improve your understanding in Spanish and your ability to communicate in Spanish.